Yeah, it was all a shitty hoax.

L.A.-based electro group YACHT have a history of gimmicky release stunts. Last we wrote about them, it was because they had made their music video “L.A. Plays Itself” available only when Uber prices surge in Los Angeles. But this one just feels icky.

Jona Bechtolt and Claire Evans, the real-life couple behind YACHT say that someone hacked their property and leaked their sex tape, but the evidence suggests they’ve invented or embellished the story for publicity. If that’s the case, they’re making light of what many would call a sex crime. One in which most victims don’t have the status or platform to, as the band says, “[control] how the video is seen, and who profits from it.”

Let’s review: on Monday, the band made a Facebook post explaining that “due to a series of technological missteps and one morally abject person, a video that we made privately has been released to the public.” Bechtolt and Evans say they feared the hacked sex tape would circulate. They asked that fans “make the right decision” and “choose not to view a private act that was inadvertently made public.” They were seeking legal action against the uploader, they said.

There was an outpouring of support from fans. Then, a few hours later, the band followed with a second message (a long comment on the first post): they’d been looking into other such sex tapes leaks and have decided to “be ‘as YACHT as possible’ about it and take some kind of ownership over what has happened.” For those who absolutely had to see the video, they’d distribute the clip themselves from a private website for $5, asking interested parties to choose this slightly more ethical route instead of turning to torrents or tube sites.

“Controlling how this video is seen, and who profits from it, is the only form of agency we have left over this exploitative situation,” they wrote.

The support roared even louder. The website servers crashed from the surge. News outlets around the world reported the story as fact. But something seemed fishy. As Thump points out, there are inconsistencies between the two posts. How could their friend who so graciously helped build the website create the thing “last night” when they’d only learned about the leak that day? Also, if they were aiming to suppress the tape’s circulation, why include the uber-titillating: “Our tastes in the bedroom might seem uncommon to some, and possibly off-putting”?

Thump went a step further and tried to purchase the supposed sex tape. For journalism. Upon checkout, they got a server error page. Their credit card was never charged. Sleuths, pervs, and other curious sorts across Reddit and 4chan similarly reported the error. No such video existed on any of the large torrent or tube sites either. The only people who’d claimed to have seen the video — Miranda July and Nicholas Thorburn of Islands — were friends of the band.

good for @yacht for reclaiming their leaked sex tape and making the moist out of it! pic.twitter.com/5i7OSrBiTd

Rumour spread that this was all a stunt to publicize the release of a music video for “I Wanna Fuck You Til I’m Dead” off their last album, I Thought The Future Would Be Cooler.  Jezebel has since updated their story, their sources say it’s a hoax to promote a single to be released today.

The band has released a statement, hosted at (yup) fuck.teamyacht.com. Read it in full below:

We created a story that was quickly revealed as fiction by the internet. We expected interest, skepticism, and laughter. We didn’t anticipate the outpouring of genuine support, due partially to the credulity with which this story was so extensively and immediately reported.

We did make a “sex tape,” and we want you to watch it. We released it as a slowly-unveiling conspiracy, inspired in equal part by The X-Files, Nathan for You, and The KLF. It’s a project that allowed us to play with science fiction, the attention economy, clickbait journalism, and celebrity sex tapes all at once.

If you tried to purchase the video here, your card was never charged. This was not designed to make money or sell records, but to explore the intersection of privacy, media, and celebrity. We enjoy and have spent a decade creating multi-faceted projects that unfold over time, using the most current tools at our disposal.

We couldn’t have asked for better fans, and we realize we’ll need to try much harder to fool you. We will continue to work very hard to produce work that engages and responds to you.

YACHT has released another apology, this time with a link to the completed music video that this was supposed to lead up to. We’ve embedded both below: 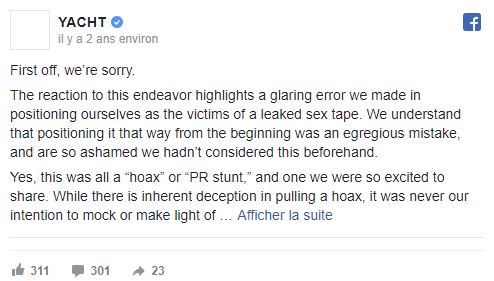