Home Celebrity All The Details About Cheating, Divorce, An Apology From Gayle King’s Now... Oprah Winfrey’s best friend, Gayle King, was married to William Bumpus in a period from 1982 to 1993. Bumpus is an attorney and an assistant attorney general in Connecticut. The couple split long time ago, but the story about their rocky relationship is still interesting to be told like it was many years ago. Here is what you need to know about their cheating news, divorce, and public apology.

William Bumpus and Gayle King decided to end their 11-year marriage in 1993. Their relationship became interesting to the public once King revealed that Bumpus was cheating on her. King was asked what living person she most despises during the Vanity Fair’s Proust Questionnaire, and she said: „I’m not a huge fan of the woman who I caught naked with my now ex-husband on June 24, 1990, at 9:16 p.m., but I don’t remember the details.“

King explained that she caught her then-husband in the act with another woman. After the incident, the couple decided to go their separate ways and end their marriage that lasted 11 years.

After the cheating allegations, William Bumpus didn’t want to keep it quiet. He also wanted to say something about the whole situation, and he wrote: „I have been haunted with this life altering choice. Though I have dealt with this privately, I publicly apologize for the major transgression that dramatically changed all of our lives. I have nothing but the utmost respect for Gayle and how she handled herself with grace. Despite the situation, she kept our children, as well as my relationship and involvement with them, as a clear priority.“

Bumpus and King share two children together, so Bumpus added: „Gayle was a great wife, an excellent mother and a fantastic co-parent. I am eternally grateful for all that she has done and continues to do to enrich my life and the lives of our incredible adult children. I continue to be a work in progress and have spent the last 26 years striving to be a better man and father. I applaud Gayle’s continued phenomenal success and friendship!“

King Talked About Her Feelings and Marriage With Oprah Winfrey

Oprah and King had many joint interviews together, and during one of them, Oprah told King that she had a feeling that her marriage to Bumpus wasn’t meant to be and that she felt that during their wedding ceremony in 1982. Oprah said: „It didn’t feel joyful. You know how you go to weddings and they’re full of joy? There are some weddings you go to and you’re just filled with all this hope for the couple. And you feel that there’s something special going on. I didn’t feel that at yours. It just felt kind of pitiful.“

Oprah added that she thought that it wasn’t her place to talk about those feelings at the time, so she kept quiet.

King shares two children with her ex-husband, Kirby Bumpus and William Bumpus Jr. The famous editor-at-large for O, The Oprah Magazine, was asked about her all-time favorite thing from her best friend, Oprah, by a caller during her appearance on Andy Cohen’s Show, Watch What Happens Live, and she replied: „Favorite, favorite thing I think would be, after I had my second baby — and they’re, you know, 11 months apart, where you say to the doctor ‘I thought this diaphragm was supposed to work?!’ — she gifted me a live-in nanny,. I didn’t plan to have babies that close together. I could never have afforded it … That was a good gift!“

Gayle King graduated from the University of Maryland in 1976 with a double degree in psychology and sociology. She is a journalist, and author, who is chief anchor of the CBS New morning show CBS This Morning, and also an editor-at-large for O, The Oprah Magazine. Her net worth is estimated up to $20 million. 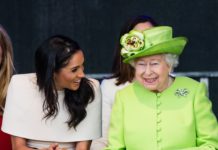 Meghan Markle To Give Tell-All Interview For $1.2M About Leaving The Royal Family