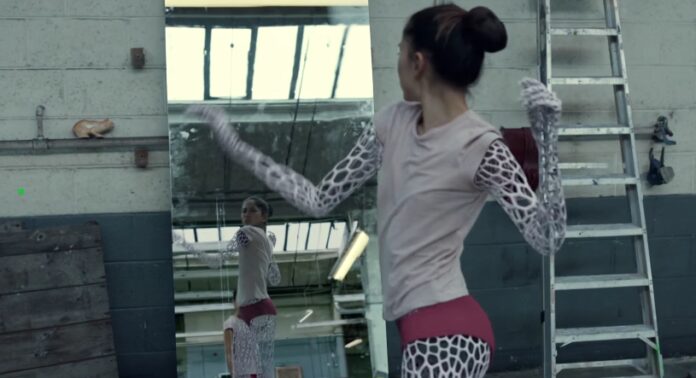 The Chemical Brothers’ new video for their Beck collaboration “Wide Open” is another in their long line of innovatively choreographed futurescapes. Directors Dom & Nic created a full CG model of Sonoya Mizuno (who you might recognize from Ex Machina) to tell the story of a dancer’s gradual transformation into some sort of skeletal cyborg.

It’s a stunning visual meditation on humanity and technology. There’s just one thing: it’s creeping some people the fuck out.

Trypophobia is the pathological fear of holes or bumps. Though it’s not recognized in the DSM (it was only defined in 2005) and some skeptics will tell you it’s not a thing, there’s a whole online cottage industry illustrating the phenomenon: lotus seed heads, honeycombs, condensation, close-ups of strawberries.

But the advanced-level heebie-jeebies come from images of people, whether real (like, for instance, someone who slept on a TV remote) or fake (a lotus head photoshopped onto someone’s tongue). If you’re brave or immune, you can find endless examples on Google Image Search.

So for some people, the image of a modern dancer transforming into a hollow cell system is the equivalent of a Fear Factor challenge. Not so much eating a pile of bull testicles as having your head submerged in a tank of tarantulas. Just watching it makes your skin crawl. And just typing it makes me itchy.

While the YouTube and Facebook comments for The Chemical Brothers’ previous videos for this album have been trolly arguments about whether they’re still good (as happens to any veteran act), for “Wide Open” it’s nothing but people arguing about trypophobia. “I can’t look at the leg man it is making me shake,” says one commenter. “My trypophobia is kicking man, fucking video,” says another. “They should have a warning.”

So consider this a warning. If you’re open to a breathtaking meld of movement and technology from an electronic duo that’s been providing that soundtrack for decades, hit play. But if you’re freaked out by holes, maybe sit this one out. And if you just diagnosed yourself with trypophobia, I apologize if I ruined your day.