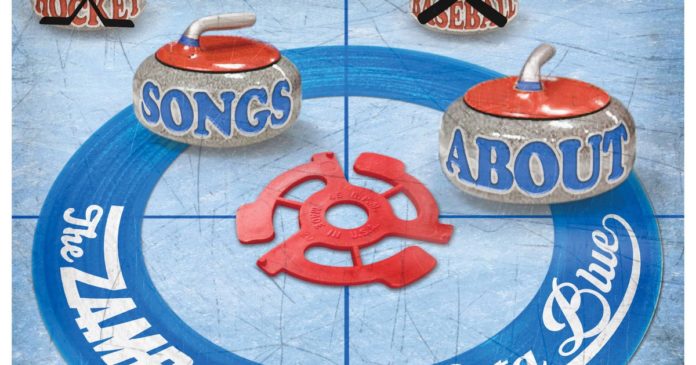 In honour of the 2010 Olympic Winter Games in Vancouver and Whistler, B.C. this month, CHARTattack scoured the interwebs for some music about some of the games’ sports.

After hockey, we Canadians are probably most proud of our dominance in curling. According to the online version of the Canadian Encyclopedia, the first reference to curling in song is “The Curling Club Polka” by a ‘Mr. Stevenson’ in 1871.

There isn’t a single version of this song anywhere on the web. It is probably much like any other polka tune. Too bad Walter Ostanek hasn’t covered this song for posterity.

As with any sport, curling has a specific set of unique nomenclature for its elements. Along with the use of words like rocks, house, sweep, slide and expressions like “hurry!” and “hard!” most recent songs about the sport focus on curling terms and the sport’s humourous terminology in satirical settings.

Here, then, are 10 great songs about curling. We’ve listed them in chronological order.

This uptempo, folksy song extolls the virtues of both curling and its participants. It features the accordion as a lead instrument. Andrew (Auld Sandy) Murdison’s  Scottish-broughed voice sing such schmaltzy lines like this:

It’s the grand old game of curling
On a curling rink that’s keen
Our forefathers player it
And they played it good and clean.

It’s there you meet the best of men
With friendship as their aim
So here’s a help to everyone
Who plays the curling game.

“The Curler’s Song” was a seven-inch single backed by “The Curler’s Alibi.” As mentioned in the Feb. 27, 1965 edition of Billboard magazine, Murdison’s release was the first time Ace Records offered a vinyl disc and its corresponding sheet music together in a deluxe package for $1.50.

“The Bonspiel Song” World Sunshine Records 1974
Stew Clayton was known for his yodelling style of country music. He released his first album on a tiny indie that’s still in business 35 years later. His Country debut album was the label’s first release and included  “The Bonspiel Song” (which is available for purchase on iTunes). It was an old-time fiddle song with a humorous look at the lighter side of the game, with lyrics like “This curling sure is a slippery game. I think I’d do better if I didn’t take aim.”

The Dik Van Dykes’ “Curling” was first included in the Hamilton, Ont.-based Music From The Armpit Of Canada. It’s a trashy Cramps-meets-Rezillos garage/punk rocker about the sport, with lyrics like “Curlers are a ready bunch of boozers and carausers… who are afraid of linoleum and throw rocks at houses.” The song was also included on the band’s Nobody Likes… debut album along with the hockey-inspired “Harold Snepts.”

Bowser And Blue’s The Illustrated Canadian Songbook album was released in 2003 and featured a cover by political cartoonist Aislen (Terry Mosher). The album was culled from material originally performed on Lorne Elliott’s Madly Off In All Directions CBC Radio show. Like all the duo’s material, “The Curling Song” is a sweet view of the sport with simple lyrics about learning the throw a rock and sweeping and entering the house.

This amateurish electro-beat tune smacks of Dr. Demento’s general silliness and appears on the KingArthur.com kids’ music website. The song focusses more on teaching kids about inertia, and objects in motion than on the actual game of curling. You can hear the song here.

In 2006, he recorded and uploaded a song a week, and the results were released on four volumes called A Thing A Week. “Curl” was written for the U.S. curling team during the 2006 Winter Olympics in Turin, Italy. Coulton morphs some of the curling terms to suit his artist’s needs, calling one player the “skipper” instead of the “skip.”

This Spanish trio formed in late 2006 and their Everything That Happens In September debut EP features cool indie rock complete with some chunky J Mascis-inspired guitar licks. The song’s more of a relationship tune, where the protagonist’s love life takes a back seat to his sporting desires, featuring lyrics like “I know for sure that that curling is my life.” You can download the song here.

This tune is named after The Tournament Of Hearts, the Canadian women’s curling championship. It’s by far the best song about the sport. John K. Samson’s passionate, sentimental look at curling has a first-rate video that mixes vintage curling footage from the CBC with the band performance in a typical curling rink bar. Samson’s tale of a lonely curing loser includes references to drinking beer and throwing rocks.

With Pat Ryan, sport and music collide. Long before Elvis Stojko and Jacques Villeneuve attempted a second careers after retiring from sports, former two-time world champion curler Pat Ryan had been writing and recording music for almost a decade. When the 2009 Canadian men’s curling championship was awarded to Calgary, Ryan, who’s a country crooner, wrote “The Brier Song,” which appeared on TSN’s coverage of the 2009 Tim Hortons Brier.

Western Canadian comedy trio The Arrogant Worms just recorded and released their own musical curling tribute for the 2010 Winter Olympics. “Curling Song,” part of their ongoing Song Of The Month series, focuses on the sport, and beer-drinking and how curling doesn’t need drug testing.