Tekashi revealed that his new single and music video would be delayed for the third straight week, this time because it would not be appropriate to release new music with everything going on. Now, the rainbow rapper’s timetable for complete freedom may have been revealed by his girlfriend Jade.

It’s not the time for a music video right now with everything going on in the world. It will be extremely selfish. JUNE 12TH NEXT FRIDAY ??

Sharing a new thirst-trappy photo on her Instagram page, Jade wrote a caption that seems to reveal when her main man will be released from house arrest, finally allowed to remove the ankle monitor.

Boosie Badazz Calling For Release Of Bill Cosby in 2022 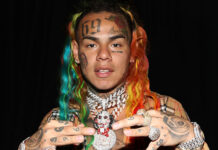 Tekashi Accuses Billboard For Rigging The Charts, And The Company Responds