It was one of the biggest moments in hip-hop this year with Tekashi 6ix9ine officially coming back last week. Releasing his return single and video for “GOOBA,” the Brooklyn star hopped on Instagram Live and explained why he snitched. Also, 6ix9ine didn’t miss the chance to taunt Meek Mill.

Now, it looks like there are signs that the two may need to play nice in the future because 69 might have a possible Roc Nation connection.

In the “GOOBA” music video fans noticed a Roc Nation logo on a baseball cap, which was only present for a split moment in the corner. The black and white paper airplane logo could be seen on an unidentified assistant in the video. While this does not confirm a connection between Jay-Z and Tekashi 6ix9ine, many are surprised to see Roc Nation being subtly represented.

Nothing has been confirmed as of yet. 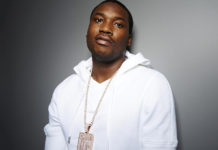