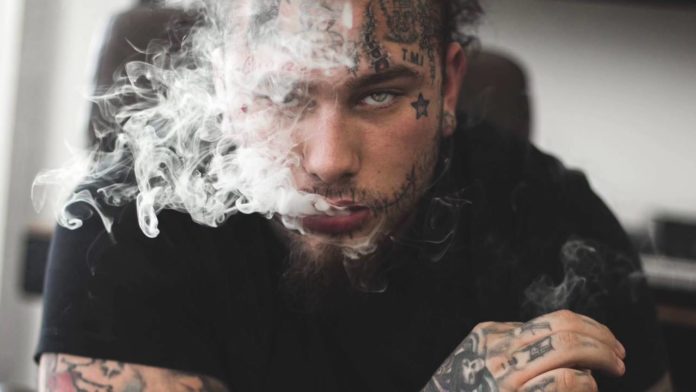 Phillip Nickolas Katsabanis is popular for promoting drugs and violence in his music videos. He is better known as Stitches Rapper, and is an American rap artist. He is most famous for hits like Brick in Yo Face, Molly Cyrus, and One Million Dimes.

The artist had many scores to settle with his fellow colleagues, something that generated widespread media attention and brought him more exposure to the public. His track Don’t Fear Death targets the popular rapper The Game, as there are reports he was hit in the face and was knocked out by his manager, Wack 100.

Much more drama surrounds Stitches rapper. Read on to learn more about his biography, career, wealth, and family.

Phillip Nickolas Katsabanis was born to Esther and Alex Katsabanis on June 17, 1995, in Miami, Florida. His family is of Cuban and Greek descent. His parents divorced when he was a year old, so he and his two older brothers Alex Jr and Dimitri grew up with separated parents. Stitches attended G. Holmes Braddock High School in Dade County, Miami, but he dropped out. He was allegedly expelled for hitting the Principal in the face.

He then moved to South Beach, Florida and started selling drugs and guns to make at least some kind of living. His bad boy act started much before his music scene controversies.

Stitches started his rap career as Lil Phil, when in 2012 he released My Name Lil Phil. However, he started to work under his current stage name, Stitches, soon after. The debut mixtape No Snitching is My Statement came in 2014, which contained first of his hits, Brick in Yo Face. The music video for the song reached 28 million views on YouTube. In 2015, he released two more mixtapes, Brick Bible and Supple and Demand. The rapper’s debut album, For Drug Dealers Only, also appeared in 2015.

In 2016, his second album Tales of a Drug Lord was released, which included the popular track Pain and Success. In 2017, he had several projects, including I need rehab, Cocaine Holiday, and The trap house.

The music he produces is hugely influenced by fellow rappers and hip hop stars like Gucci Mane, Wiz Khalifa, and Juicy J. These three superstars have impressed the music audience far and wide with their talents. Other people whose music helped him include Trace Cyrus, Fat Trel, Blac Youngsta, and Compton Menace.

Unfortunately, his profile did not help the stereotype of crime and violence when it comes to rappers. He was arrested numerous times. In 2017, he had drug and gun charges against him in Miami, Florida. Police found a gun, weed, ammunition, and other incriminating stuff on him.

As of 2022, the estimated net worth of Stitches rapper is around $500,000. Although his music career helped him with his wealth, it is widely thought drug dealing is the major source of his wealth. He is still young, and his career will probably have more success and money come his way in the future.

Stitches was married to Erica Duarte who is eleven years older than him. He was only seventeen when they married. She was his judicial assistant before being his wife in 2012. She appeared on Paris Hilton’s My New BFF back in 2008. The pair divorced in 2017. They have three children together, Rex, Rocco, and Evelyn.

Stitches rapper is 186 cm tall, and chubby. He has many tattoos on his body, including stitches across his mouth to match his name. He has a teddy bear tattoo on his forehead, an AK-47, and the word cocaine on his arm.

Recently, there have been rumors of his death on social media, including images and articles. He made no comments to directly deny these rumors, which makes it look like a publicity stunt to further his career. Therefore, he is alive and well.