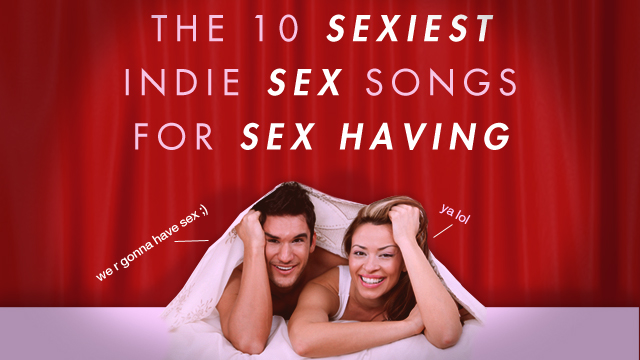 Grab whatever it is you need to rub those parts to fruition and hit play.

If your idea of foreplay is rubbing noses together sweetly, or if for some reason you both feel like crying during the act, here’s the song.

Drown out the distracting din of the city with some dubstep that actually turns it into soothing music.

Close your eyes and let this song bring the beach to you. Unless you’re actually at the beach. You devils.

If it’s even sadder sex you’re after, try the song’s live version.

Don’t knock acid sex until you’ve tried it. And when you do, play this.

God damn this song is slimy and really, really sad. For 90% of you, it’ll hit your sexual appetites perfectly.

You wanna play some Marvin Gaye, but your significant other thinks that’s corny. Before you dump them, share one last intimate moment with “Sexual Healing”’s neon progeny.

8. My Bloody Valentine, “She Found Now”

It’s only been out for a few days, but this track is already a must for turning your bedroom into a structural aphrodisiac.

Granted, it’s a song for a very specific point, but the enthusiasm’s so contagious it’ll spill over into other sections of the session.