According to “The Blast”, Rob Kardashian alleges Blac Chyna had been “snorting cocaine” prior to attacking him with a 6-ft metal pole. The excerpts obtained from court documents reveal that she had not been using drugs or drinking during her pregnancy with Dream nor when she was breastfeeding their child.

“As soon as she stopped breastfeeding Dream in the second week of December 2016, she started drinking to excess and using cocaine again,” Rob alleged in court documents. He added that on the day of the altercation, “Chyna participated in a photoshoot at the Hidden Hills house…where she consumed large amounts of Moet Rose champagne and snorted cocaine”.

Kardashian continued that Blac Chyna pointed a gun at him and threatened his life. He added that there were friends on FaceTime who could vouch that she was “under the influence of drugs and alcohol, holding a bottle of champagne, brandishing a gun toward Rob and acting erratically”.

Blac Chyna Serving Up To Foot Fetishists On OnlyFans

Blac Chyna Put Up A Show On Her OnlyFans Page 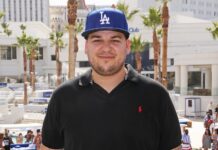 Rob Kardashian Has A New Instagram Friend, And She Is Stunning!