Home Music Rilo Kiley: Adventures And Nudity In The Studio 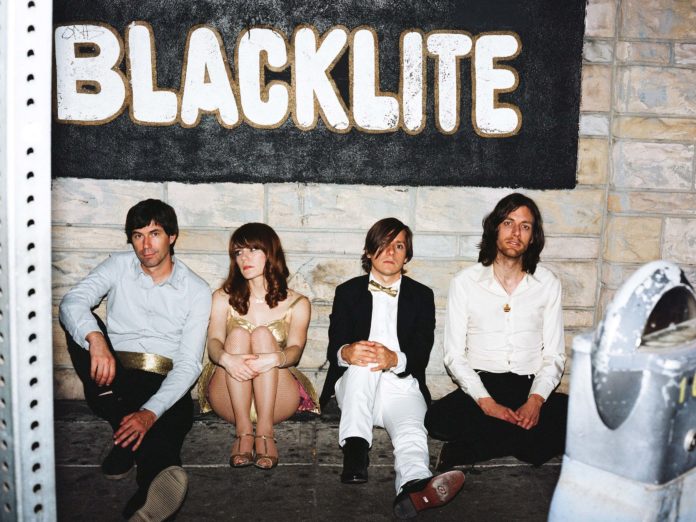 Rilo Kiley have to speak up.

The band members are sitting in a semi-circle, in a little bunker/dressing-room directly under the stage at Lee’s Palace, and the opening band is a noisy one. The walls are painted black and a single light bulb is making this all feel a lot like an interrogation. Their new record, More Adventurous, has a decidedly accurate title — seeing the indie-pop band take stabs at country, punk, stadium rock and electro-pop.

In an active bid to experiment and expand, the band worked with several producers, including Dntel’s Jimmy Tamborello, Beachwood Sparks’ Dave Scher and Jimmy Eat World producer Mark Trombino. Ultimately though, all the musical and stylistic excursions were passed through another producer, Mike Mogis.

“The whole thing ended up going through the Mogis filter, because he mixed the record and kinda produced everything as a whole,” says singer Jenny Lewis. “Which hopefully tied it up a bit, and made it feel slightly more cohesive.”

The album was recorded in a Nebraska deep-freeze last winter, with the band cooped up in a studio for hours on end.

“I think it definitely had an effect on how the record came out,” says drummer Jason Boesel. “Certainly we all went a little nuts and that’s unavoidably mixed into the way our performances came out.”

Lewis is not so sure.

“I think we would’ve gone crazy in the summertime too,” she says. “I feel that’s just where we were at. We were obsessing over mixes and we were frustrated with certain things. Making anything, you have a tendency to overanalyze.”

In the push to perfect the songs, Lewis ended up naked in the studio at one point. Having tried everything else to put the right spin on her vocals for “I Never,” Lewis stripped down in a secluded booth during one late-night session. The resulting take is a standout on the album.

“I had done a bunch of different passes at that song, over the five weeks we were there,” she explains. “And none of them were quite right. Blake (Sennett, guitarist) and I were alone in the studio together and it was just an idea that came up. I don’t know if it really influenced it, or if at that point it would have gotten there anyway, clothed or nude. It was just a funny thing to experiment with.”

The lyrics of More Adventurous are as experimental as the music, with Lewis trying out a variety of forms and points-of-view.

“I don’t think I made a decision to write in a certain way,” she says. “I think, just writing songs, at a certain point you want to talk about things other than relationships and explore different perspectives. But the songs just came about. And I think in response to that, the songs I’m writing now are way more traditional. I feel the shift.”

The bandmates also have new experiences to bring to the table. Following some success with their last CD, 2002’s The Execution Of All Things, they each split off into side projects. Lewis sang with The Postal Service, Sennett fronted The Elected and Boesel recorded with Bright Eyes.

“But I think this is easier for us,” says Lewis. “This feels like coming home.”

“You come back to the band with different perspectives,” adds Boesel. “In the darkest times it gives you something else to look forward to, and in the best of times you use what you’ve learned.”

“And it’s always good in arguments,” mocks Lewis. “Because you can always be like ‘Forget you! I’m just gonna go do this other thing! I hate you anyway!'”