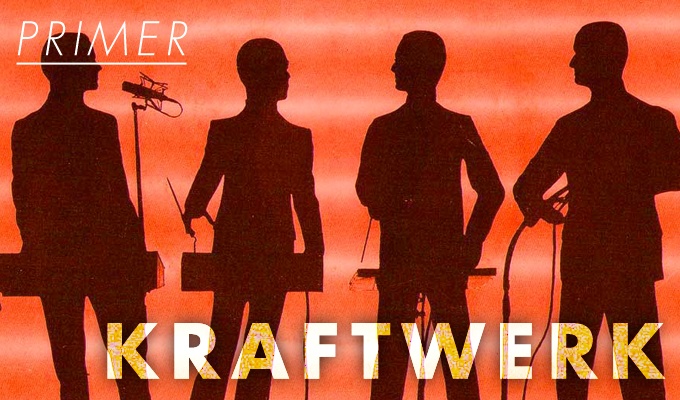 If you have a list of alternative icons you’d love to get into but don’t know where to start, get ready to cross some of them off with our new feature PRIMER, in which we guide you through the highs, lows, and occasional confusing bits of the careers of renowned indie icons.

I’m on a mission. I want to ‘get’ Kraftwerk.

In the light of Kraftwerk’s recently announced eight-night residency at the Museum of Modern Art in New York City, I wanted to teach myself about the band’s musical context and legacy. Before writing this Primer I knew next to nothing about the group, besides the fact that I should be embarrassed about my lack of knowledge. But I don’t think I was alone in that, so I gave myself a mission to learn about the group by creating a quick Idiot’s Guide to Kraftwerk. If you’re as much as a Kraftwerk n00b as I was prior to this research, I hope you appreciate this. Feel free to chime in in the comments to let me know what I missed.

Kraftwerk has had a rotating roster of members with varying degrees of input, but for the most part it’s is the brainchild of Ralf Hütter and Florian Schneider. But beyond that, there are a few really important factors that set the stage for the band, and we need to address them before we can fully appreciate:

1.    Post WWII Germany: After that whole, you know, mass genocide and rampant war thing, Germany was in rough shape. Not just physical ruin, but a national identity filled with guilt, defeat, and lingering tension. Western popular music – rock and roll, that is – offered a sort of escape for the disenfranchised German youth, and inspired the krautrock movement.

2.    The krautrock movement: In the ‘60s, German popular music was predominantly Schlager music (e.g.). The counterpoint was rock and roll, and krautrock was the German take on that Western sound. But krautrock was highly experimental, which made it a catalyst for musical innovation.

3.    The rise of experimental music: Free jazz and experimentalism became increasingly popular throughout the ‘60s. In Germany, an experimental electronic/noise scene began to thrive, lead by artists like Conrad Schnitzler, Hans-Joachim Roe Delius, and, perhaps most of all, Karlheinz Stockhausen who essentially invented original, purely electronic music composition.

4.    New electronic technologies: Using electronics as instruments was a totally new concept in the ‘60s, which is why Karlheinz Stockhausen was so prolific. The idea of original, entirely electronic compositions was totally unique. That’s easy to forget in the iPhone age, where we can make electro bangers as easily as we can make poops. Or you can do both at the same time if you have the Garageband app. The first commercially available modern synthesizer was released in 1965 by another electronic music legend, Robert Moog.

KRAFTWERK IN A NUTSHELL

If you were to blindly listen to a popular Kraftwerk track – “The Model,”say – your reaction might be WTF, followed by LOL, and then you would resume watching a baby goat massaging a horse. Here are some key points to help you ‘get it’:

1.    Playfulness and irony: Don’t mistake Kraftwerk as a super serious band. In their music and image – even song titles, like “Ohm Sweet Ohm” – they’re having fun (although it might not look like it)

2.    Technology, robotics, and machinery: These themes are rampant in the group’s sound, lyrics, appearance, and artwork. A lot of that is because of the timing – electronics were evolving fast in the ‘70s, and computers started being released. Digital and mechanical technology fascinated Kraftwerk, and as such became key to their sound, style, and persona. Eventually, they turned themselves into robots in the ‘80s, and would often appear as digital figures and even do interviews via robots over the next three decades

3.    Visual style: Members tend to appear stiff and robotic when shown on album covers, partly for reasons outlined in the above point, and to support their overall general aesthetic of order and artificiality. The now classic Kraftwerk live show involves the four members (or their robot counterparts) standing symmetrically in a row, with all sorts of lighting and projections keeping the audience entranced in what would otherwise be an incredibly dull live show (visually, at least)

4.    Minimalism: The ‘80s saw a lot of hyper-masculine rock stars, and not just guitarists or vocalists. Even the keyboard players got showy and way too into their instrument, often surrounded by a dozen different synths that they would happily and conspicuously play with multiple hands. Kraftwerk kinda said fuck you, I can play on a pocket calculator.

The organization was the duo of Ralf and Florian before they became Kraftwerk. “Milk Rock” is perhaps the most straightforward song on the Organisation’s only album, which isn’t saying much. Listen for Florian’s psycho flute sounds, which was his chosen instrument in the early years

Like “Milk Rock,” this track is probably the most straightforward song on the album. The band makes their debut as Kraftwerk here, but we only begin to hear some of the styles that would come to characterize the band.

This six-minute piece bridges the band’s experimental roots with the rigid 4/4 electronic music they would soon become known for. They weren’t the only band using synthesizers at this time – hell even Elton John was in on it – but this kind of all-electronic music was hugely ahead of its time, and foreshadowed the massive electronic era that would follow.

Autobahn is not only Kraftwerk’s best selling record, but an album that would plot the band’s direction over the next three decades. You can hear they’ve adopted pop sensibilities and are beginning to sing in their own oddly detached robotic way.

This whole album is quite beautiful – a highlight is hard to find, but I’ll post album closer “Ohm Sweet Ohm” because I love it, and the title is a good example of the Kraftwerk sense of humour.

Trans-Europe Express is classic Kraftwerk. Especially this track, which references David Bowie and Iggy Pop, who were living in Germany at the time and were mutually inspired by Kraftwerk and the German electronic music scene (a bit more on that later). The track was also sampled by Afrika Bambaata in “Planet Rock,” a landmark hip-hop song.

That synth line sounds a bit familiar, no? Computer World is another brilliant record on which Kraftwerk not only continue being totally ahead of their time, but prolific in their ideas about the future of technology, and how computers would come to completely define our world. “Computer Love,” for instance, foreshadows the rise of online dating decades before it would become a reality and get millions of antisocial nerds laid as fuck.

The Kraftwerk legacy is nicely captured in this two-hour live album and subsequent DVD, which you can watch in full on YouTube. Minimum Maximum was well received, and the video presents an excellent sample of the band’s iconic multimedia live show.

WHY YOU SHOULD CARE ABOUT KRAFTWERK

If you’ve gotten this far and still aren’t giving even the smallest fuck, lets look at two main reasons why you should:

1.   They’re pivotal: Kraftwerk was a key player in experimental music. They’re a defining figure in electronic music (and in effect pioneered techno, and dance music). You can even trace their influence in post punk, hip hop, new wave, and of course pop music. They’ve inspired everyone from Bowie (especially on his classic album Low) to Daft Punk (who are clearly massively indebted to Kraftwerk) to Coldplay (see “Computer Love” above). They’ve been sampled in songs by Jay-Z, Lil Wayne, Dr. Dre, and the most important rapper figure of all time, Will Smith. LCD Soundsystem has sampled them a couple times too. They’re so goddamn important.

2.    They helped define a new German identity: WWII completely dismantled Germany in a number of ways, but while the new post-war generation looked to music for escape, Kraftwerk owned their German-ness. Sometimes that meant directly referencing the war (see “Vom Himmel Hoch,” which vaguely means “From Sky High” in English, and sounds like airplanes dropping bombs). They played with and parodied clichés and stereotypes about Germans and Germany, and somehow managed to successfully embrace, address, and shape their country’s culture.

There. There’s my relatively brief explanation of who Kraftwerk is, and why they’re so amazing.

If you want more, I recommend you watch Kraftwerk and the Electronic Revolution, a documentary you can find on YouTube in 19 pieces. Also on YouTube is a series of ten-minute cuts of every Kraftwerk album, which will help you get a quick sense of the music on each release. Still, want more? Kraftwerk has a music-making app that you can download. See? They’re always on the cusp of music technology. After all, they are robots.

Why Hire a Pro for Your Los Angeles Decorative Concrete Repair...

Marela Bush - August 7, 2020 0
Having the right tools and technical skills does a flawless job; this is very true for having decorative repair projects. With tons of popular...

What Steps Should I Take Following My Car Accident in 2020

Inkjet vs Toner Cartridges: How Different Are They – 2020 Review

What are Autoflowering Seeds – 2020 Review

What To Know About Hyperactivity In 2020

How to Choose the Right Mattress For You in 2020

How Could a Conviction Affect Your Traveling in 2020

Where Can I Buy Low-Priced Football Shirts in 2020

Why Does Yoga Continue to Grow in Popularity – 2020 Review