Apparently, Post Malone’s many facial tattoos come from his low self-esteem. While talking to GQ 24-year old revealed that his decision to get them comes down to the fact that they make him feel better about himself.

“I’m a ugly-a** motherf**ker” he said and continued explaining where are all these issues coming from: “It does maybe come from a place of insecurity, to where I don’t like how I look, so I’m going to put something cool on there so I can look at myself and say, “You look cool, kid,” and have a modicum of self-confidence, when it comes to my appearance.”

Post was also talking about his struggles in school that were the beginning of his deteriorating self-worth. “Middle school, I would cry myself to sleep every f**kin’ day. High school, the same thing. I tried to drink some beers to get rid of that sh*t, but it just never goes away. And I don’t think that’s anybody’s fault; it has to do with something predisposed in you.”

“It's personal shit.” –@PostMalone Photographs by @jason_nocito_studio. Styled by @mobolajidawodu.

Malone also admitted that his mental health is work in progress since he is self-medicating even though he is fully aware of the risks. When asked whether or not he is receiving any help Posty was vague, saying that he is trying but: “It’s difficult. Through my songs, I can talk about whatever I want. But sitting here, face-to-face, it’s difficult.” 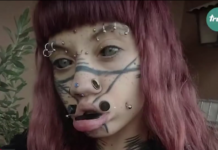 Girl With The Most Extreme Body Modifications in 2022

Cardi B Debuts A Huge New Back Tattoo 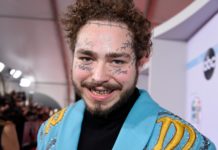 Post Malone Is Rolling On Stage Blurting Out Lyrics