Police brutality has become all too common in the United States over the past few decades although now that we are in the internet age, the acts of police brutality have been put on full display. While many are still mourning the death of George Floyd, a brand new video has surfaced from Midland, Texas in which a man by the name of Tye Anders was arrested for allegedly rolling through a stop sign.

Terrifying moments for a young Black man and his family in Texas, as numerous cops point guns on him and then assault his 90-year-old grandmother.

His alleged offense: rolling through a stop sign. ⁠ pic.twitter.com/WdxwFeX1y0

You can see officers point their guns at Anders despite the fact that he is clearly surrendering himself with his hands up in front of his home. At one point, his 90-year-old grandmother came out to help calm everyone down but when the officers went to go arrest the 21-year-old, they ended up knocking the elderly woman to the ground. Justin Moore, Anders’ attorney, is now speaking out on behalf of his client, noting that he did nothing wrong.

“Racial profiling and pretext stops have been at pandemic levels in this country for generations. This incident falls within this age-old trend of following black men and arresting them for fabricated reasons. As Tye laid on the ground compliant, yet scared, his 90-year-old grandmother came out to deescalate this high-stress situation by praying for her grandson and officers. That also didn’t work. As the officers approached, they ended up assaulting her and knocking a 90-year-old woman to the ground”, Moore said and noted that Anders has filed harassment claims against the Midland Police in the past. 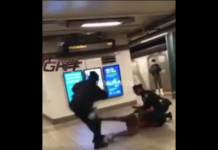