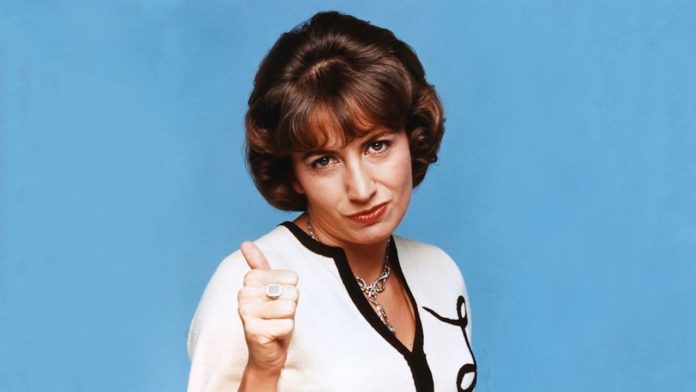 Penny Marshall sadly left us on December 16, 2018, at 75 years of age. She was at her home in California at that time. She has been either in front of the camera or then behind it for more than 40 years, as a true original, approachable, self-deprecating woman, known for her signature, often-imitated, and nasal, Bronx accent voice.

She rose to fame after the long run on an ABC show “Laverne & Shirley”, airing from 1976 until 1983. The “Happy Days” spinoff was about two single working women who are also best friends and roommates. This series was a real pop culture phenomenon at the time and has remained just as much through the decades. It was always among the most-watched programs on TV, mostly thanks to the charms and likability of Marshall, as Laverne, and her amazing and touching chemistry with Cindy Williams, who played Shirley. Marshall has never starred in another sitcom since because she chose to stay behind the camera since. She then directed several classics during the ’80s and ’90s, like “Big, Awakenings”, and “A League of Their Own”. Read on to learn even more about her life.

“Penny Marshall” is an amazing name for a star, because it is catchy, friendly, and easy to spell, as well as to remember. However, it is somewhat invented, because the actress turned director was born as Carole Marshall, named after the Golden Age of Hollywood legend Carole Lombard. The middle name was born out of a compromise with her older sister, Ronny. Ronny wanted a horse, but her parents said no since they lived in the middle of Bronx. She was angry for saving her pennies for nothing, so her mom and dad gave the new baby a middle name “Penny”.The seeds of show business as a career were already planted as well, as both of her parents worked in entertainment. Her father made industrial films, while her mother was an instructor of tap dance.

The men from the life of Penny Marshal

Despite the connections of her family to the entertainment industry, Penny Marshall did not at first plan to pursue a Hollywood career, but instead majored in psychology at the University of New Mexico. There she met a football player Michael Henry. She decided to drop out and they got married in 1963, and had a daughter Tracy. They divorced in 1969. By the early 1970s, she decided to start up acting. In early 1971, Marshall married for the second time, to actor Rob Reiner, who grew up on the same street in the Bronx as her. The street was “very wide,” as Marshall joked in her memoir “My Mother Was Nuts”, which is why they never met earlier. Reiner and Marshall auditioned for roles “All in the Family”. Reiner scored the role of Mike Stivic, but Marshall did not manage to be Gloria.

After their divorce in 1981, Marshall dated another icon, Art Garfunkel. He was one of the top two musicians in “Simon & Garfunkel”. He said that Marshall helped him through a tough period of depression, when they were together and after. “Penny is a sweet human being who can bring anybody down to earth. We had a lot of laughs, great sex, and a ton of party nights.”

Penny Marshal who earned her place in Hollywood

After paying the bills throughout the 1960s, working as a dance teacher and a secretary, Penny Marshall caught decided she wanted to act and make it in Hollywood. She and Farrah Fawcett were cast in a Head & Shoulders commercial as roommates in an ad. Marshall remained on TV, winning small roles on different shows like “That Girl”, “The Bob Newhart Show”, “Love”, “American Style”, and one TV movie “The Feminist and the Fuzz”.

Her breakthrough came in 1972 with the recurring role of Myrna, the secretary to Oscar Madison (Jack Klugman) on “The Odd Couple”. Several years later, Penny Marshall easily won the role of Laverne on “Laverne & Shirley”, because she played the character on Happy Days, and because the spinoff was created with her in mind, by her brother, the TV writer and producer Garry Marshall.

The Musical Stylings of Laverne and Shirley

The TV sitcoms exploded during the 1970s, as the shows popular with kids got all kinds of souvenirs, most notably lunchboxes, dolls, and LPs. “Laverne & Shirley” premiered and received instant success in January of 1976. By the end of the year, hardcore fans would purchase “Laverne & Shirley Sing”.

It was released by Atlantic Records, and the album featured Penny Marshall and Cindy Williams as their iconic characters, doing the covers of songs from the late ’50s and early ’60s setting. Some songs were Everly Brothers’ “All I Have to Do is Dream,” the Crystals’ “Da Doo Ron Ron,” and Connie Stevens’ “Sixteen Reasons.”

Penny Marshall approached this for fun. “I knew I couldn’t sing. How often do you get asked to make a record? We can’t sing, let’s do it!”

As a director, she was in her own league

Marshall moved from actor later, but he thought about it during the airing of “Laverne & Shirley”. She directed four episodes of the show from 1979 and 1981, along with “Working Stiffs”, a pilot starring Michael Keaton and Jim Belushi.

Penny Marshall the director got her first directing work with the 1986 movie “Jumpin’ Jack Flash”. Associated Press states that star Whoopi Goldberg and the original director, Howard Zieff, did not get along, so Goldberg brought Penny Marshall as a replacement. Her next film was “Big”, a 1988 comedy that gave Tom Hanks his first Academy Award nomination and made almost $115 million. With this success, Marshall was the first woman with a movie that hit $100 million. At this time, she also directed the “Awakenings” that received an Oscar nomination for Best Picture. This was only the second time a movie with a female director earned this honor.

Penny Marshal would not direct anything

Several movies could have been her debuts as well. During a 1986 interview with the Los Angeles Times, Penny Marshall said she nearly directed “Peggy Sue Got Married”. Although the finished film starred Kathleen Turner and was directed by Francis Ford Coppola, it fell apart because of “creative differences, as they say,” as Marshall revealed. Around 1983, she also tried with “The Joy of Sex”, a 1980s teen sex comedy. “I didn’t have the time, because I was in the middle of Laverne & Shirley.” A few other scripts came to Penny Marshall, but she was not interested. “When I’d get to the place where it said, ‘… and then they put underpants on their heads,’ I would lose interest”.

Laverne and Penny Marshall have the same favorite drink

Laverne and Shirley’s quirks are what made the show special, and there was nothing quirkier quirk from the favorite drink, which is amazingly milk mixed with Pepsi. This is oddly specific and sounds gross, meaning it has its roots in real life. And it does, as Penny Marshall herself drank it during her childhood.

She Good Morning America during a cast reunion in 2012 that she asked her mother to have soda with a meal one day, who relented and said Penny should drank her milk first. She they were mixed. “She didn’t wash out the glass so she then poured the soda in. I used to drink it a lot.”

Marshall has then drank this in real life for years, even during the Los Angeles Times in 1988. According to PopSugar, this weird drink tastes like “a Pepsi float once the ice cream has started to melt.” Interesting.

She is responsible for the opening rhyme of “Laverne & Shirley”

The show has one of the best theme songs ever made, as well as an amazing opening credit sequence. Title characters Penny Marshall and Cindy Williams walked around a fictional retro Milwaukee, goofed at work and banged apartment doors into each other. However, it all starts with Marshall and Williams skipping down the street in sync, and singing a schoolyard chant of sorts: “One, two, three, four, five, six, seven, eight / Sclemeel, schlemazel, hasenpfeffer incorporated.”

This is actually a schoolyard chant, a “Yiddish-English hopscotch rhyme” Penny Marshall loved to sing as a kid while going to school. Co-creator and Penny Marshall’s brother Garry Marshall remembered it while shooting the opening sequence. “Penny, teach Cindy, ‘Sclemeel, schlimazel'”, Williams remembered Garry Marshall said, so her co-star did and the sequence was born.

Penny Marshall and Garry Marshall were a sibling pair to find lasting fame in this ruthless business, just like the Osmonds and Carpenters. The Marshalls also showed up for a cameo in the classic Halloween film “Hocus Pocus”. Garry is a suburban man in the Devil costume who flirts with the witchy Sanderson sisters. His wife is angry for it, and is portrayed by Penny Marshall.

The siblings collaborated on more than one occasion, as Penny directed “A League of Their Own” that featured Garry as Walter Harvey, the candy company bigshot. Penny Marshall appeared in her final movie as narrator. This was the 2016 ensemble comedy “Mother’s Day”, the last film Garry Marshall directed before passing.

Penny Marshall and her best friend

Penny Marshall was best friends with Cindy Williams on our TVs, but off-screen, her best friend was a Hollywood legend, Princess Leia Organa herself, the legendary Carrie Fisher. Marshall discussed this in her 2012 memoir “My Mother Was Nuts”, and mentioned her Fisher met during the ’70s when Paul Simon, Fisher’s husband back then, and his friend and “Saturday Night Live” boss Lorne Michaels, introduced the two ladies. They knew the two would be friends, and they were right. Beginning in 1981, these BFFs threw annual joint birthday parties, as both were born in October.

These parties are legendary in Hollywood, as only the highest elite was invited, including Robin Williams, Jack Nicholson, and Nicole Kidman. David Bowie had to crash the party one year as he was not invited.

Penny Marshall also called out Carrie Fisher at the beginning of her book. She wrote, “I want to thank Carrie Fisher, my friend and partner in crime for more than 30 years. We’ve lasted longer than all of our marriages combined. Our crazy lives have meshed perfectly.”