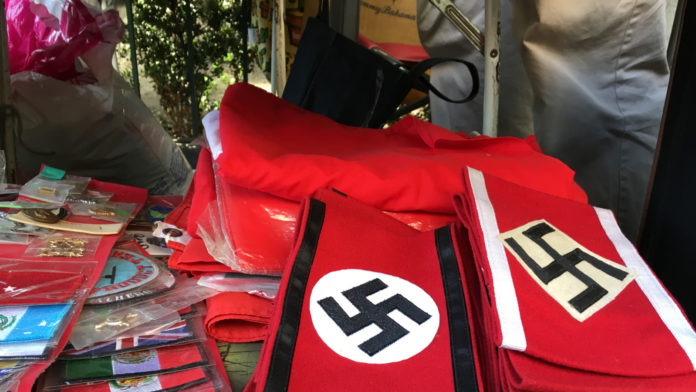 The shirt was designed by the late Malcolm McLaren, who managed the Sex Pistols and was known for emblazoning swastikas on his wares that were sold at his London, England-based Sex shop in the late ’70s. That in itself would make the shirt worth a hefty sum of money, but since Vicious wore it, its value increases even more.

Interestingly enough, this shirt has gone on sale right when Jesse James, Sandra Bullock’s soon-to-be-ex-husband, put a replica of a German Red Baron with the Nazi swastika, or Hakenkreuz, on it up for auction on eBay, only to remove it because of the outcry it caused. James was pictured in the same photo giving the Nazi salute.

Some toolbag out there is going to look at this shirt and go, “Hey, awesome! Sid owned it! If I buy it, I’ll be really cool! I’ll own a piece of history!”

See, there’s several problems with that.

I’m sure someone out there is reading this, going, “Hey, free speech, man!” and “The person who bought this probably doesn’t hate Jews or any other minority; they probably just love the Sex Pistols or are a rock ‘n’ roll fan.”

Well, even if you’re not a Nazi, if you’re walking around with a fucking swastika on your chest or own this shirt somewhere, people are going to think you are. Good luck convincing them otherwise. Even if you buy it and don’t wear it in public, what are the chances you’re going to display this prominently in your home without shame? Slim to none.

As for the free speech argument, the Nazi swastika is a hate symbol, and hate speech is not protected free speech (at least in Canada), nor should it be. The swastika was originally used in ancient India and is a symbol in Hinduism, Jainism and Buddhism, and it’s been used as a symbol by numerous other cultures throughout history. But the problem is the Nazis bastardized it by turning it on its side, creating the Hakenkreuz and using it as a symbol for white supremacy, murder and hatred.

While I’ve seen the Hindu swastika (not the Hakenkreuz) used in a religious context at Hindu temples in Uganda, its use there is much different. The use of the Hakenkreuz is outlawed in Germany, and there’s good reason for that.

It’s because that symbol was used by Nazi Germany in the genocide of six million Jews during the Holocaust, along with millions of other Poles, Romani, Russians, Ukrainians, queer people, Jehovah’s Witnesses, liberals, communists and differently abled people. Do you really want to be some douchebag who owns something that symbolizes the murder of tens of millions of people? It will be forever associated with that.

The point of punk rock is to provoke, sure, and while no one in the Sex Pistols was a Nazi, wearing or even owning a shirt like this just legitimizes the use of a hate symbol.

The whole reason the Dead Kennedys wrote a song called “Nazi Punks Fuck Off” was that the U.S. west coast punk subculture started adopting Nazi symbols to shock people, and eventually, some people in the scene became Nazis themselves. Sure, the average person is not going to turn into a Nazi just because they see a Hakenkreuz, but selling a shirt that’s got one on it… just ain’t cool. Neither is buying it.

Then again, if the price of hate is set at $15,000, perhaps it’ll dissuade the average moron. But who knows.