Home Music These are the 10 Most Played Along Songs of all Time –...

If you play an instrument, chances are you have a go-to song that you whip out whenever people ask you to demonstrate your skills. My piano, for example, has had to endure countless renditions of The Beatles’ “Let It Be” – it’s a crowd-pleaser. But what about other musicians? I took a look at our catalogue of over 14 Million songs to determine once and for all which tracks aspiring musicians flock to the most.

It’s been almost 20 years since the Peppers released what some people argue is one of the best alt-rock songs of all time. Played at basically every single one of their shows, Californication has stood the test of time and remains an undying fan favourite. And whether it’s due to the distinct strumming combinations, John Frusciante’s solo or simply the damn-near iconic status of this song, its spot in our all-time Top 10 is well deserved.

Ah, “Wonderwall” by Britpop icon Oasis. Just how many campfires have you been a part of? We may never know, but definitely enough to claim a spot on our list. With how incredibly popular this song is, especially amongst beginners, I am surprised that it doesn’t rank higher.

To be fair, the chord scheme of Oasis’ legendary Britpop anthem may not be as simple as it sounds at first, but don’t let that put you off. Of course you could always transpose the track to the key of Am and  I said maybeeee…

Outperforming both Californication and Wonderwall? While only being released a little over a year ago? I tip my hat to this power ballad. And it’s easy to see why musicians of all skill levels are drawn to this song (besides the universal acclaim, the four Grammy nominations and the fact that it peaked at #1 in almost every major music market).

Easy and familiar chords like G, C and Am share the spotlight with some trickier chords like Em7 and D/F#, making it a solid choice for beginners and experts alike. So tell me something boy, aren’t you tired trying to fill that void? Or do you need more…? No you don’t!

In case you forgot just how much Fonsi dominated the summer of 2017, here’s a friendly reminder that Despacito is the most viewed YouTube video of all time with 6.6 Billion views. Love it or hate it, the catchiness of this ultimate Latin Pop number is undeniable. And that catchiness can easily be replicated with just four basic chords. Just writing this paragraph is enough to put that smooth beat on repeat in my head.

Everybody loves the underdog! In between the commercial and critical success of previous songs, Sublime’s alt-rock track may seem like the odd one out. Why is it so beloved amongst guitarists you ask? Well, Rolling Stone placed it on their list of 100 Greatest Guitar Songs of All Time, for one thing. And all it takes to play this hit are two chords. Yup, you read that right. G and D, that’s all you need right there.

We’ve reached our Top 5! You need no more than six chords to play Passenger’s chart-topping hit that is as lovely as it is heartbreaking. The intro of the song may sound familiar to sharp-eared Red Hot Chili Peppers fans; the artist has revealed that it was indeed inspired by the outro of the band’s song Slow Cheetah.

But if you let that go and focus on the two challenging chords which could make our jam a bit difficult, all will be swell. That Bm chord and Dsus4 chord are not that bad once you’ve practiced them a couple of times.

Mr. Sheeran sure has left his mark on pop music; as the only artist with two entries on this list, it’s safe to say that his songs are as in demand as ever amongst aspiring musicians. Played at pretty much every wedding back in 2014, Thinking Out Loud has a gorgeous melody, sweet lyrics and a surprisingly manageable chord scheme.

Now here’s a song I definitely didn’t expect to pop up in the Top 3! Despite the fact that the six chords transcend basic chord knowledge, this R&B track is immensely popular, especially in the US. Why? It might be the song’s irresistible and intriguing composition. Or it might be the fact that no other than Barack Obama put it on his Summer 2019 playlist. Who’s to say?

I couldn’t help but scratch my head at this one. How did this Dutch band manage to peak at #2 on our list? Don’t get me wrong, this indie rock track has a lot going for it, and you should definitely give it a try, but this is certainly a surprise.

Digging just a little deeper into our history, it becomes clear that the song’s popularity comes from the fact that it had a set place on our homepage all the way back in 2014. You’re welcome Kensington! We’re still waiting for free VIP tickets.

We meet again, Ed Sheeran! Numbers don’t lie, and our numbers tell me that there was no competition whatsoever when it comes to the #1 spot on our list. The singer-songwriter is our reigning champion, and the only surprise here is that Perfect’s chord scheme is significantly more complex than that of other songs on this list. Which, I suppose, makes this feat even more impressive.

Or maybe it’s because good old Ed has tuned his guitar half step down to Eb. Which means you could do the same to simplify the chords. So transpose the song one step up or use the capo tool on the first fret. Enjoy and here’s to you, Ed Sheeran, and many more jam sessions! 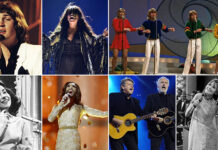