Home Style Why Monte Carlo is the Perfect Location to Host a High-End Fashion...

The principality of Monaco is one of the most expensive, and one of the wealthiest locations in the world. With its center in the Quartier of Monte Carlo, there are estimates that over 30% of the city-state’s population are millionaires. With a population of around 39,000 as of 2018, that makes over 13,000 millionaires living in Monaco, which explains all the glitz, glamour and luxury that the principality is noted and renowned for. Its economic development was spurred by the opening of its casino, also called Monte Carlo, in the late 19th century, and since then, Monaco, and more specifically, Monte Carlo has become a hub for gambling and high-end tourism.

The Place du Casino, a section at the city’s western end, has become world-famous for its casinos, and thus making it the face of the Monegasque gambling circuit, as well as a byword for the flaunting of wealth, glamour and luxury. All of this makes it one of the best places in the world to host a high-end fashion show and we will also tell you how Monte Carlo is best-suited to a fashion show of this type.

For starters, it already hosts one of the most prestigious fashion shows in the world, with the Monte-Carlo Fashion Week. The extravaganza is usually held in March every year, with the world’s top designers and models descending on the city to strut their stuff (quite literally) for a crowd of the best fashion reporters, magazines and the well-heeled local population. The Monte-Carlo Fashion week has been a mainstay on the circuit for years now, and so there is already a well-established tradition in the city towards high-end fashion.

Further, Monte Carlo’s status as one of the richest cities in the world makes it the perfect destination for any such show, with a huge potential client base available in the city itself. As stated previously, with over 30% of Monaco’s population being millionaires, they automatically become the target audience for a high-end fashion show, and so any designers or studios displaying their latest creations at a fashion show can then set up shop in the principality for a few days after the show, thus driving potential clients towards them and towards buying their clothes and accessories. Further, the timing of the show could also be such so as to take advantage of other events.

For example, Monte Carlo hosts the Monaco Grand Prix as part of the Formula One race calendar every year. The race is considered one of the most prestigious races on the Formula One calendar, and is preceded by a number of events, with many people flying into the principality just for this race. Thus, it may be beneficial for any fashion show to be held during the race weekend, so as to draw even bigger crowds and more eyeballs towards the designers and their newest designs. Indeed, given that the race is held on the streets of Monte Carlo itself, it is quite a regular sight to see people viewing the race from their balconies and windows, as well as the richest of the rich doing so from their boats and yachts out in the harbour, through which the circuit passes, which shows the popularity of the Grand Prix.

Another feature which makes it perfect for a fashion week, are the hotels and casinos for which the city is most famous. The Monte Carlo Casino is one of the most iconic locations in the world, having been featured in two James Bond movies, as well as Ocean’s Twelve, for example, and also houses the Opera de Monte-Carlo. The casino, with a huge variety of games, such as blackjack, roulette, poker, craps, baccarat, as well as slot machines and video poker games, has something to cater for every gambling fan, and you will often find the well-heeled strata of  Monegasque society in the casino on a weekend.

This is just one example of an extremely extravagant casino in the principality, with the Hotel de Paris Monte-Carlo being another example of an iconic location in Monaco. While the Hotel de Paris itself does not have a casino, it is still one of the most luxurious and grand hotels in the principality, and with a view of the sea, it is also one of the most sought-after locations in the city. The hotel has also featured in two Bond movies, as well as Iron Man 2, showing just how glamorous and famous these locations in Monte Carlo are. Now imagine being able to host a fashion show at either of these locations, with some of the biggest and richest people in the city being frequent visitors of both places.

The necessary clientele would already be present, with the added advantage of being able to use these locations and their inherent glamour to draw even more eyeballs and crowds to such events. Further, it would also allow for these events to gather more attention, and thus create a ‘buzz’ for the designers and the organizers to be able to eventually sell more of their creations. There are quite a few other such locations in the city which can be used for this purpose, with these two being singled out for being the most iconic locations in Monte Carlo, but any of the other hotels or casinos in the city would also make for excellent locations for such high-end fashion shows.

Monte Carlo is synonymous with wealth, luxury and glamour – all of which are also prerequisites for a fashion show. Thus, this makes the city a no-brainer for hosting a high-end event, with numerous venues which could be used for the task, as well as an established fashion culture as well. Further, the inherent wealth of the population makes it even better, as designers and organizers will have willing clientele in the front row of their events, and they will be able to sell directly to them. All these factors make the city a prime candidate for hosting fashion events. 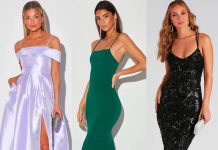 How to Choose the Ideal Prom Dress