Brian Austin Green has confirmed he and his wife Megan Fox separated after nearly 10 years of marriage. The 46-year old “Beverly Hills, 90210” star married the actress in 2010 and they have three sons together.

Green revealed their break-up in the latest episode of his podcast, saying they have been “trying to sort of being apart” since the end of last year. He said: “I will always love her. And I know she will always love me and I know as far as a family what we have built is really cool and really special”.

Green also commented on pictures of Megan with Colson baker, the rapper Machine Gun Kelly. Brian said: “She met this guy, Colson, on set. I’ve never met him. Megan and I have talked about him. They’re just friends at this point”. Green added: “I trust her judgment, she’s always had really good judgment. I don’t want people to think she or he are villains or that I was a victim in any way”. 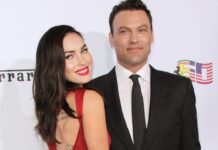