Megan Fox and her husband Brian Austin Green have reportedly been living apart for months. Megan (33) was pictured without her wedding ring on when she was out shopping on Tuesday and the pair were seen swapping their kids at a Los Angeles parking lot.

Brian (46) has been living in Malibu and Megan is in Calabasas with their three kids Noah (7), Bodhi (6), and Journey (3). A source told The Sun: “Megan and Brian love each other very much but just can’t live together. They have been living apart for months, far before the pandemic started. They have not made plans to get divorced anytime soon either”.

The couple started dating in 2004 when Megan was just 18 years old and Brian was 30. They split up in 2009 and then got back together tieing the knot in 2010. In 2015 they broke up again and Megan filed for divorce, but they reunited, and soon after their youngest child Journey was born. 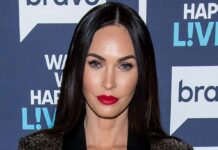