Instagram fans have aided in Nicki Minaj looking into dropping an unreleased track: “New Body” with Kanye West and Ty Dolla $ign. When Kanye West decided not to deliver his highly-anticipated album “Yandhi”, all of the songs went on the shelf. The project was leaked and fans who grabbed themselves viral copies have been enjoying its tunes, including Ye’s song “New Body” featuring Nicki Minaj and Ty Dolla $ign.

There were rumors that the track would be reimagined as a cleaner, Christian version for Yeezy’s “Jesus is King”, but in the end, “New Body” didn’t make it to that tracklist, either. According to reports, Kanye and Nicki couldn’t see eye to eye.

“New Body” has gained traction over on TikTok, and we may just see the official version hit streaming services. While watching DJ Boof on Instagram Live, Nicki was spotted in the comments. A few fans asked about “New Body,” and she told them that she would contact Kanye to see if he’d agree to release the song. She also mentioned that they shot a music video for the track, as well, while reportedly also saying she’s not a fan of the track. 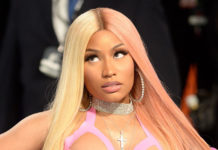 Godfrey On VladTV: “Nicki Minaj Is Challenging Kenneth’s Manhood” And Is “Verbally Abusive”