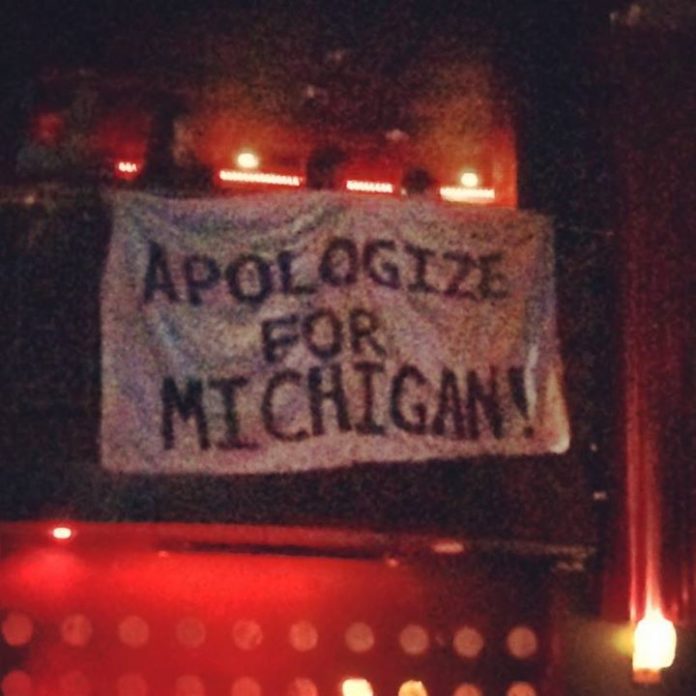 For many music fans, Kathleen Hanna is the face of punk rock feminism. A figurehead for the ‘90s riot grrrl movement in the massively influential Bikini Kill, she’s in the midst of a major revival with her new band (and pseudo-solo revival) The Julie Ruin, the release of a new documentary about her life (The Punk Singer) and a re-examination of radical politics and music driven by Russian punk activists Pussy Riot. But that renaissance has also reopened backlash and criticism that, to some fans, Hanna has never sufficiently addressed.

This past Saturday at The Julie Ruin’s concert in Toronto, a group of fans dropped a banner reading “Apologize For Michigan” from the balcony of the Mod Club. The reference is to Michigan Womyn’s Music Festival, an annual female-only festival that has become a lightning rod in recent years for its very controversial “womyn-born-womyn” policy that explicitly excludes trans women. Kathleen Hanna’s former band Le Tigre played MichFest in 2001 and 2005.

Hanna’s former bandmate JD Samson has commented on the ongoing controversy, but to this date, despite her on-record assertion that “trans women are women,” she has remained silent on her participation, which some see as a tacit endorsement of the festival and its policies. Author and blogger Imogen Binnie, for example, wrote a well-circulated blog post asking Hanna to apologize for playing the festival.

The banner drop happened briefly before security took it down on Saturday. Many in attendance (including concert reviewers) seemed to only learn about it after the concert when a photo was posted to Facebook. So we reached out to a spokesperson for the action, Toby Wiggins, to recount what happened.

“We sent her several emails asking her to address her participation in Michigan before she came to Toronto. We were hoping that she would respond before starting her tour. Those emails were not answered, which is what lead to the decision to do a banner drop.

The banner was dropped before the second song of her set. Just before she started to play, it was unfurled and “Apologize for Michigan” was shouted into the crowd. Kathleen Hannah started singing, watching as the security guards quickly tore it down. She did not respond. Not many people in the crowd turned around in time to catch it – the banner was facing the stage, as were the patrons. Those who dropped the banner avoided security and left the Mod Club without a confrontation.”

He also shared this statement on behalf of the action:

“Today we took action in solidarity with transwomen who for years have been advocating to be recognized for who they are by the Michigan Womyn’s Festival. When artists like Kathleen Hanna who, in theory, share a politic that is critical of systemic oppression make mistakes, we expect them to take responsibility, and be accountable to their fan base and political values.”

The banner drop may have been missed by many in attendance, but it’s since reopened (and personalized) the heated debate around MichFest (that included a petition in 2013, and at least one artist, Andrea Gibson, boycotting the festival until trans women are included. Today, Cathy Brennan wrote a post on a site called Gender Identity Watch attacking and misgendering Wiggins, a genderqueer transman who uses male pronouns and defending MichFest. Wiggins’ response is below:

“I want to center the experience of transwomen in relation to ‘radical’ feminists here. As much as this is a brutal message to a trans guy, the VAST majority of this violence is directed towards transwomen (in relation to Michigan, other exclusions, transphobic writing/blogging/journalism, systemic transphobia, and constant microaggressions). This is why it’s so important for transmen (and folks of all genders who do not experience this type of violence on this scale) to stand with transwomen and challenge this bullshit head-on. Solidarity, and together we are stronger.

Chart Attack sent a request for comment to Kathleen Hanna, which was not immediately returned. We will update this article if we hear back.