The rapper Jim Jones had an unpleasant experience in the “Target” store when one of the managers followed him around and accused him of “messing up the store” because he dropped a rug.

Jones waited for 15 minutes for another store manager to come out and talk to him, to no avail. He says he “feels like being profiled” even though he was just shopping around like everyone else.

Here is the full video.

Jim Jones is a famous rapper, record executive and music video director. Throughout the early years of his music career, Jones was known for being the hypeman of his group the Diplomats, but he was also shooting most of the music videos during their successful early career. Through 2007 and 2008, Jones was known for creating the rapper rockstar style which was very popular at the time. He eventually created his own “Nostic” clothing label.

Jones’ net worth currently is $8 million.

T.I. Urges People To Not Spend Any Money On #BlackoutDay2020 Protest 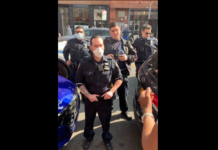