Judging by Instagram photos posted by Kelly Henderson, Jay Cutler wasted no time after the divorce from Kristin Cavalleri and found comfort with his ex’s former BFF. Henderson shared a photo of what appeared to be Jay’s hand with his trademark rainbow beaded bracelet. Kelly didn’t tag anyone in this picture and captioned it: “Much needed happy hour. Happy Friday y’all”.

Kelly and Kristin had been BFFs for years before a mysterious rift broke the two apart and ignited rumors that Kelly was having a steamy romance with Jay.

Kristin and Jay who have three children Camden(7) Saylor (4) and Jaxon (5) were dealing with marital problems for quite some time. A few days ago Jay revealed the split on his Instagram page saying: “With great sadness after 10 years together we have come to a loving conclusion to get a divorce. We have nothing but love and respect for one another”. 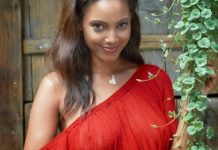