Nobody is quite sure what to believe after Iggy Azalea returned to Instagram with some new pictures this week. Her first post of the year was uploaded several days ago, flaunting her flat stomach in some athletic wear. Then, she slipped into a skintight dress and showed off her famous curves. She does not look like a woman that gave birth a few weeks ago.

Unless these are old pictures, or she just had an incredible comeback from her pregnancy body, then it’s possible that the rumors that she gave birth to Playboi Carti’s baby are untrue.

For months, Iggy Azalea and Playboi Carti were rumored to have been expecting their first child together and the latest rumor is that the baby has been born. Carti even went and bought a family-friendly luxury SUV. However, neither of them has confirmed or denied the news. 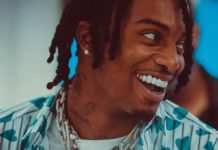