Back in January, Ultra Music Festival’s attorney Sandy York wrote to Miami city manager Arthur Noriega, that Ultra believed it would need to invoke the Force Majeure clause in their agreement, cancelling UMF 2022 because of the lingering COVID-19 pandemic. Of course, it didn’t take long for EDM fans to throw their hands up in disappointment and frustration.

In York’s letter, first reported by Billboard, Ultra claims that it anticipates the City of Miami invoking that clause to push the dates for UMF to March 25-27, 2022:

“Given the current status of the pandemic in relation to mass gatherings and the public health considerations of our local community, we are working cooperatively with our city partners and plan to release an official festival update soon,” a representative from Ultra told Billboard. No official statement from the organizers has been released as of publishing.

And to add oxygen to the fire, news came at the end of January that Coachella and Stagecoach, which were planned to take place in April 2022 would also be cancelled.

Prior to the hell that was 2022, Coachella had gone on for over two decades without any pause. In March of last year, festival organizers attempted to keep the festivals in play, pushing the dates out to October, obviously never taking place. It was then decided that if possible, the event would occur in April 2022. No longer.

So what are EDM artists (and their ever-loyal) fans to do this year, with the inability to gather and dance to their hearts’ content?

Michaella, 24, has progressively become a highly sought-after independent, recording/performing artist and songwriter. Her versatility as an artist has allowed Michaella to create an array of songs that can suit any occasion. Her writing style has developed significantly from the time she started writing lyrics to cadences of popular songs at 10 years old to now, where she is writing full songs top to bottom over tracks with various producers that she’s collaborated with in her career this far.

For new and established artists, creating and maintaining visibility in an already over-saturated industry can be difficult. Chart Attack spoke with Ploszaj and Michaella about their track and how emerging EDM artists can continue to drop some serious beats, despite the ongoing coronavirus pandemic.

“Many of today’s social media platforms are oversaturated with artists trying to break into the scene, so it’s so important to be creative and original with the content that people choose to post,” Michaella advises. “Keep up with trends and add your own twist to it. Stay connected with your fans and other people in the industry.”

But maintaining a positive reputation and brand image is essential as well. “You have to be able to continue focusing on your branding, social media content, and staying relevant with industry trends and pop culture,” Ploszaj added.

We are living in a country right now, where hatred and discrimination seem to dominate. With a new administration in The White House, it is President Biden and Vice President Harris’ mission to help our country (and its people) heal by injecting love and warmth back into our everyday lives.

“The best advice I can give anyone in the industry is to just be genuine and real,” Michaella says. “Not only will it help you create better music, but it will help you form a deeper and more meaningful connection with other industry people and those that are taking the time to listen to what you put out there.”

Ploszaj also encourages folks to “reach out to as many influencers, artists, and managers as possible, so you can create that relationship with them. A friendship will go further than trying to simply work with someone.”

For artists looking to just start their careers or even grow them, looking for the right equipment and studio setup seems to be the most important part of the infrastructure. Wrong.

“People always think you have to get the top-of-the-line equipment to create the best, high-quality sound, but I don’t think that’s always true,” Michaella warns. “Make do with the equipment that is affordable and friendly to your wallet right now, so you’re not blowing all of your money on creating something that you’ll eventually have to run ads and create promotions for. There’s plenty of equipment out there that is more affordable that can get your sound pretty close to what the professionals are using.”

Like Michaella, Ploszaj also encourages new artists to be smart with their investments. When the Arizona-based artist first started his music career, he took the money he earned as a starting DJ, and reinvested it into studio equipment and production, quickly learning how to create a unique and diverse sound identity. “I’ve made the mistake in thinking I need all the newest equipment and plugins. You quickly realize that most of the equipment and software do the same thing. Try to focus on and zero in on a specific piece of equipment or plugin that you’ve done your research on. Master that tool and then move onto the next.”

“As I’ve gotten older and more experienced in my life, age has definitely played a role in what I write about, and how I choose to word my lyrics. When I was younger, I created a lot of songs that were romantic and more ‘innocent’, compared to what I’ve been creating now as a young adult. I always consider my demographic when I’m writing or performing on certain topics. Why? I always want to be relatable to my audience, but also don’t ever want to tarnish my image, considering how sensitive people can be these days. I’m still trying to find that balance.”

Ploszaj, 24, who started his career as an avid hockey player up and until college, realized his true calling wasn’t on the ice, but performing and producing music from a soundboard and DJ booth. “Creating music isn’t about making something that sounds cool, or what’s going to make me famous. The goal in music is to create a story, share a message, or relate it back to someone’s struggles, heartbreaks, successes, while bridging the gaps in cultures around the world, and bringing them together.”

When we asked Michaella how she and her team writes/produces songs, she said that it varies. “It usually starts off with finding an instrumental, listening to the track, and then trying to determine the mood or tone of the beat. The initial mood that I feel when I listen to a track for the first time, determines what I write about. EDM lyrics are pretty repetitive, for the most part, so I try to come up with a short-verse and a really catchy top-line that leads into the drop. From that point, I usually let the producer’s work shine by giving the beat some breathing room. The recording process is always the same for me; I like to picture myself singing the track where I feel that it could be played, and then I channel that energy into my recordings.”

As for Ploszaj, he likes to start with the pre-drop of the track, first. “You need to have a game plan on what genre, sound, and market you’re trying to attract for that particular song or project, so you have some sort of direction to follow. If I’m making an instrumental for a specific artist, I’ll do some research into their entire music catalog, focusing on a style I see fit for my next release, so everything can be somewhat cohesive. Once I come up with an idea, I’ll send it to the vocalist and see if they vibe with it. Once we agree on an instrumental, we will sit down and brainstorm a specific message or story we want to tell in the song. I like to work from the pre-drop backwards. In my opinion, the pre-drop is the second most important part of the vocals, because it closes the statement. The intro vocal is the most important part because if you don’t grab the listener, they’ll switch the song.”

For an industry that was once valued at around $7.1 billion, having dropped 56% to approximately $3.3 billion as of July 2022, EDM certainly has its own conspiracies and myths that deserve explanation.

According to Ploszaj, the biggest myth in the industry is the idea that an artist must stick to a certain sound. “I’ve heard this from several different sources, including artists and managers. I understand the concept behind this, but if you don’t stick to a specific sound, it’s not going to make or break your career. The more diverse you are, the more markets you’ll reach.”

In agreement with Ploszaj, Michaella also added that this misconception many people have concerning genres, is that you can only cater to one genre. “This was true when marketing your brand and music was limited in certain capacities. We have so much technology and ways of networking and communicating, that today it makes it possible to break away from your main genre, and experiment with different styles/sounds. You’ll reach a larger audience that way.” 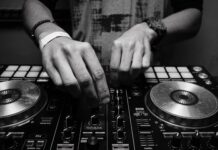