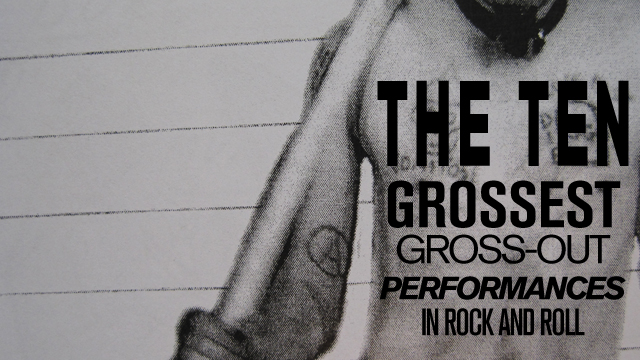 The grossest, filthiest, most essential shows.

There’s no better place to start than with the Rock Iguana. A young Mr. Pop was notorious for breaking bottles on stage and rolling around in the glass shards, cutting up his chest and back. Vomiting all over that same stage was also pretty standard. Keep in mind, Iggy popularized the stage dive. While I get that a rock show can be a frenzied, spontaneous thing, I sure wouldn’t want my hands on that bloody, puke-soaked dude.

At the ’92 Reading Festival, all-girl grunge group L7 were sick of getting pelted with mud. Singer Donita Sparks ripped out her bloody tampon and whipped it into the crowd, saying “Eat my used tampon, fuckers.” Ick, spent uterine lining — take that, ya bums!

The Joan of Arc extension found their way onto a Christian rock bill in Bartlesville, Oklahoma. The way the band tells it: the unairconditioned venue was sweltering hot and most of the group had stripped down to their waist. At some point, Nate Kinsella made his way from behind the drumkit to the front of the stage. He peeled off his boxers, and wrung all of that drummer ball sweat — an especially gnarly brand of perspiration — over the first-row audience. That one landed poor Natey in jail for two months.

In 1993, Blind Melon frontman Shannon Hoon, drunk as could be, decided to relieve himself on the front row audience of Vancouver’s Pacific Coliseum. They say it’s bad to hold it too long, but I thought their thing was “No Rain”?

The Almighty Defenders, a supergroup made up of the Black Lips and King Khan & BBQ, took the pee party a few steps further. At the end of a set at San Fran’s Bimbo’s 365 Club in 2010, one of the Lips pissed into the waiting mouth of a naked King Khan, who then spit the mouthful across the crowd. It’s worth mentioning that both King Khan and the Black Lips are no strangers to weirdo piss play on stage. But it’s also worth mentioning that the show was all-ages.

Link Meanie of The Australian punk group the Meanies got into the habit of blowing grandpa-style snot rockets over the heads of fans who dared to get close enough.

This video’s not for the squeamish. Justice Yeldham is one part Miles Davis, one part Glenn Branca and five parts big top attraction. He coats his mouth with Vaseline and then plays a pane of glass (with a microphone pickup taped to it) like a trumpet, buzzing his lips against the surface. He wears a tool belt full of effects pedals to process the noise. The real show happens when JY takes bites out of the instrument, chews on it, and expels the bloody, oily mess all over the place.

The B-hole Surfers did all sorts of weird stuff on stage. Singer Gibby Haynes would shoot shotgun blanks over the audience. They would project videos of sex change operations on their backdrop. But the most oft-cited story is when Gibby, whacked on acid, took off his dress and had sex with their on-stage skinhead dancer Kathleen while drummer Cabbage took a plastic baseball bat filled with urine and sprinkled it over the crowd like some punk rock baptism.

So GG — born Jesus Christ Allin, for real — is basically the patron saint of the heinous stage act. On an early Jerry Springer, he said “Rock and roll music, to me, has always been about real rebellion and non-conformity, and my mission is to put danger back in rock and roll — something that’s been missing for a real long time.” And put danger back, he certainly did. GG did some downright vile stuff on stage including but not limited to: attacks on fans, forced sex acts, self-mutilation and then there was the poop, so much poop. That was kinda his master stroke. He’d drop a steamy pile on the floor, smear it all over himself, throw it into the crowd, and hell, he’d even eat some of it. GG promised his fans he’d commit suicide on stage for their viewing pleasure, but a heroin overdose took him before he could deliver. Bummer? Here’s his gussied-up rendition of a Hank Williams tune.

10 Craziest Things Famous Musicians Ever Did

9 Tips to Boost Immunity and Keep COVID Away

Marela Bush - January 26, 2021 0
The spread of COVID-19 has brought our worlds to a standstill and our attention to our health, which we’ve all become more conscious about...

4 Advantages of Working with Stainless Steel in 2021

5 Incredible Benefits of Owning a Lap Pool in 2021

Different Types Of Furniture That You Should Have In Your House...

How Important Are Graphics in Modern PC Video Games – 2021...

4 Tips and Tricks for Tracking Your Online Shipments or Packages...