Gigi Hadid (25) has revealed she was pregnant while walking runways during fashion week in February and March. The supermodel admitted she was “a few months along” as she jetted from runway to runway in an array of killer heels and uncomfortable outfits.

Yesterday, she went live on Instagram to share that she was a couple of months pregnant during fashion weeks in the four of the biggest capitals in the world including New York, London, Milan and Paris. During that time she was shrewdly hiding her changing figure.

At the beginning of the March Gigi was already 12 weeks along, and she started wearing looser outfits to cover up her growing belly.

Gigi also used to opportunity to shut down speculation that she had got cheek fillers: “People think I do fillers on my face and that’s why my face is round, it’s like, I’ve had the cheeks since I was born. Or like, especially Fashion Month, when I was like already like a few months preggo, you know?”.

The blonde bombshell and Zayn rekindled their rocky relationship in December 2019, which would have been around the time she fell pregnant. Gigi is currently isolating at her family farm in Pennsylvania with Zayn, her sister Bella Hadid and her mother Yolanda. 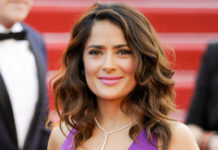 28 Women With The Prettiest Boobs in Hollywood 2022