Brandi Glanville claims she had a steamy lesbian night with “Real Housewives of Beverley Hills” co-star Denise Richards. Brandi, famous for stirring controversy on the show, alleges that she and Denise shared a night of passion. Denise allegedly warned Brandi that husband Aaron Phypers “can never know”.

In the clip, Brandi sits down to lunch with Kyle Richards, Dorit Kemsley, Teddy Mellencamp Arroyave, Lisa Rina, and Erika Girardi, before Denise has arrived. “I f**ked her,” Brandi said bluntly, “Woke up the next morning, she said, ‘Aaron can never know about this. He’ll kill me'”.

Richards denied the affair in the clip obtained by “People” saying: “What the f**k?! That is not true”. Near the end of the clip, Denise begs cameramen not to air anything about the alleged affair. Denise states that she’ll walk if the network, Bravo, opts to go ahead with the clip. “Bravo has a choice,” she asserts, “If they ever want me to be on the show…they need to cut that”, the actress, who married Aaron in 2018, said. 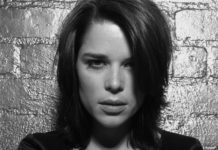 Here Are the Best Pictures of Neve Campbell Nude – 2022 Review