Ben Affleck and Ana de Armas looked very close as they strolled barefoot along the beach in Costa Rica. Rumors of their romance swirled from the beginning of shooting “Deep Water” in New Orleans. It seems like they can’t hide their relationship anymore, or they don’t want to.

The couple became the talk of the town last week when they were spotted in Havana, Cuba, where they cheerfully snapped photos with fans who later shared them on social media.

Ana was born in Cuba, and later she moved to Spain in order to pursue her acting career. She married Spanish actor Marc Clotet in 2011 but they divorced two years later in 2013.

Ben divorced from Jennifer Garner in 2018 with whom he shares three children. He has years of struggling with substance abuse behind him, mainly alcohol, spending time in-and-out of rehab for the past couple of years. 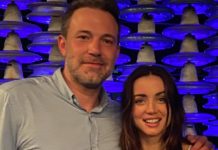