Ashanti took to Instagram to show off her insane figure, and we’re convinced she’s taken a youth potion. The singer posed in some denim shorts, pigtails, and a revealing bikini top in her most recent pic. The ageless beauty got a ton of love on the post from the likes of Jamie Foxx, Normani, Gabrielle Union, Halle Berry, and many more.

Opting only for a trio of lollipop emojis as a caption, Ashanti was glowing in the shot. Mr. Foxx was especially floored by how incredible she looked, commenting, “My goodness. Kill em din”. Normani also chimed in, writing, “jeeeeeez”.

Along with receiving all this wonderful love and support, things have been going pretty well for Ashanti lately. Not only did she celebrate the 18th anniversary of the release of her self-titled debut album earlier this month, but the R&B star was also featured on a track off DaBaby’s new album, “Blame It On Baby”, titled “Nasty”.

Is it Possible to View Instagram Stories & Posts Anonymously? 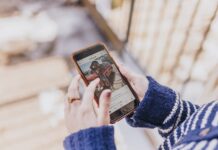