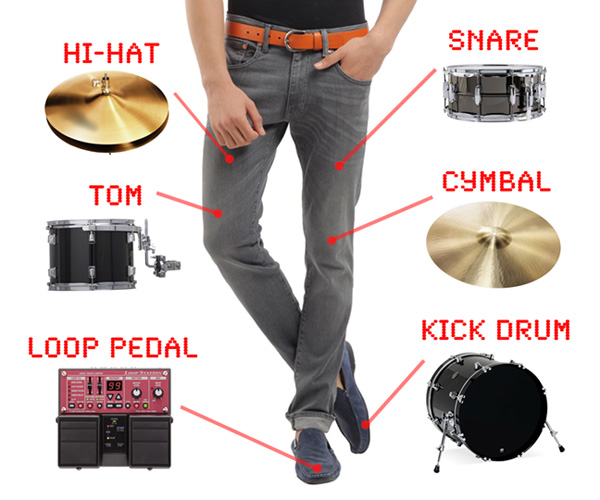 Music and technology have a longstanding, deeply important relationship. As much as the genius songwriters and instrumental virtuosos, advances in the way we create and record sound are what propel music forward into uncharted territory, giving us the Hendrixes and the Kraftwerks and the PSYs of the world. Technology is the backbone of mankind’s collective musical timeline.

We’ve witnessed plenty of that in the last century. The microphone! The electric guitar! Multitrack recording! The analog synthesizer! The Sampler! The Pro Tools! Just about everything you listen to goes back to one or all of those once new instruments. Not to mention the cultural shifts that were sparked by new ideas, new practices, and new art that emerged from new technology.

But have we done everything? We’ve conquered and explored so much, are we ever going to see growth in technology so meaningful, so catalytic? Who knows! In the meantime, let’s take a look at six new innovative musical instruments that are giving it a shot.

Teenage Engineering’s flagship miniature synth is brilliant. It’s not a stretch to say it looks like an Apple product (albeit a bit more Fisher Price-y) and that’s an apt comparison in many ways. Most new synths look like some Alienware bullshit, complete with clunky displays and and unintuitive interface.

The OP-1 is, as you might predict on first glance, extremely playful, aesthetically minimal, and a creative playground. It’s also super versatile, and not just with the range of sounds you can squeeze out of the handful of synth engines. The OP-1 can sample and record audio from a built-in mic, line-in source, and even the radio. The list goes on, but every feature has its own limitations, and they’re clever and deliberate, like little reminders that unlimited capability and unlimited creativity are not synonymous. Maybe progression must come from regression!

DIY electronics are not easily approachable. But you (yes, you!) can build all sorts of contraptions, and littleBits makes it easy. The NYC startup sells open-source electronic modules that snap together to create simple circuits and non-threatening robots. littleBits recently partnered with KORG to create synth-building kits, and if this Reggie Wattsdemonstration (above) tells us anything, it’s that they’re they’re easy, fun, zany, and hell, even kooky! Does the synth sound good? Not particularly, but that’s not really the point. Stop being so cynical and build something mind-blowing.

I think a lot of iPad owners neglect the device’s potential for music making. They download a free drum machine app, get bored of it after two minutes, and figure there’s not much better out there. There is. Just ask Gorillaz.

GarageBand is decent, but skippable. KORG, on the other hand, has some excellent stuff in the App Store, including their brand new KORG Gadget synthesizer studio. KORG Gadget offers a collection of 15 different synthesizers and drum machines, each with its own fun faux-physical interface. If that’s too sprawling, their digital versions of the Polysix (classic polysynth!), MS-20 (classic monosynth!), or Electribe-R(underrated drum machine!).

The theremin blew peoples’ minds when it was introduced in 1920. Today it’s kind of just a novelty, even a gag. In an effort to make the theremin more than just The “Good Vibrations” sound/sci-fi motif, Moog have announced the Theremini (out this summer… maybe). They’ve taken the theremin and given it gear steroids: variable pitch assistance (it’s un-fuck-up-able!), a built-in tuner for seeing what note you’re kinda hitting, 32 voice presets, adjustable built-in delay, a little built-in speaker, and more. I don’t know why they designed it like a late-’50s artist’s rendering of the late ’90s when the traditional design was so awesome, but this should breathe new life into all those superfluous covers of Nintendo themes.

Cool Fender strat, YAWN. Oh yeah, I guess that ’60s Silvertone is kinda neat, YAWN. Did you ever stop to think to yourself, maybe everything I think a guitar should be is COMPLETELY WRONG? No, you didn’t, and that’s why at first glance the Gittler Guitar looks like a goofy arts and crafts project. Well buddy, that goofy arts and crafts project costs $5,000, so joke’s on you. Essentially it’s 31 playable frets (roughly 10 more than a “traditional” electric guitar) stuck to one long perpendicular metal rod. And some strings and a pickup. I know what you’re thinking: “can it shred”? Uh, lol, is Satriani bald? But seriously, watch this Gittler shredding duet.