Tekashi 6ix9ine and 50 Cent probably won’t ever be seen around each other on account of 6ix9ine’s testimony against other members of the Nine Trey Gangsta Bloods.

At one point, they were incredibly tight, but Fif has since admitted that he knew that 6ix9ine was no good. 50 recently said that there is no chance they will be working together, ever again.

I wouldn’t work with him. What it is, is it’s just against the way I grew up”, Fif said and it didn’t take long for 6ix9ine to respond: “Won’t be the first time 50 abandons his son… lemme just mind my business”.

Fif’s biological son felt compelled to respond: “I don’t give a f*** what a rat say”. It’s apparent that Marquise Jackson isn’t interested in getting in the middle of the feud between his estranged father and 6ix9ine.

#50cent biological son comments on #6ix9ine mentioning him while talking about #50cent recently ? 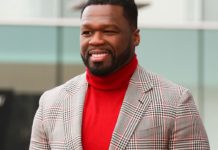