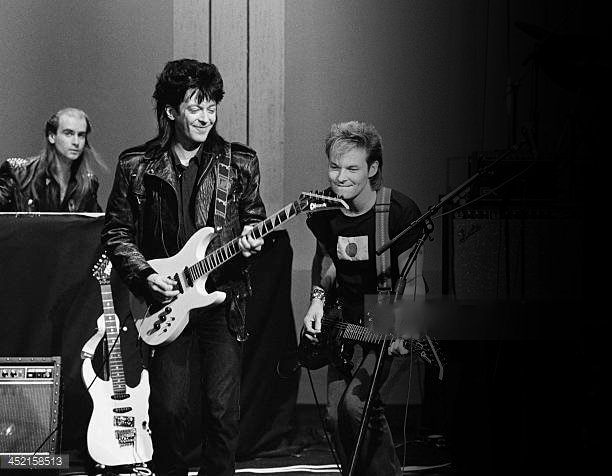 Kevin MacMichael, guitarist and co-founding member of the ’80s band Cutting Crew, died in Halifax at the age of 51. Instead of his loss, ChartAttack has chosen to honour his legacy and present you with 10 reasons why Kevin MacMichael was cool:

1) He moved to England in 1985 with Nick Van Eede and formed The Cutting Crew. Soon thereafter, their debut album, Broadcast, went No. 1 in 19 countries.

2) Cutting Crew toured with The Bangles and Huey Lewis And The News.

3) He hit No. 1 for two weeks on the Billboard Magazine singles chart in 1987 with Cutting Crew’s signature song “(I Just) Died In Your Arms,” before being overtaken by U2’s “With Or Without You.”

4) After the band dissolved in 1993, he impressed the heck out of former Led Zeppelin frontman Robert Plant in an audition and was immediately invited to join Plant’s backing band.

5) He co-wrote some of the songs and played guitar on Plant’s 1993 album, Fate Of Nations, and was named the musical director for Plant’s touring band during the European leg of the tour.

6) He was nominated for a pair of Grammy Awards – directly, with Cutting Crew in 1987 for Best New Artist and indirectly with Robert Plant in 1993 for Best Hard Rock Vocal Performance.

7) After leaving Plant’s band, he moved home to Dartmouth, Nova Scotia and started working as a record producer, opening a studio called Soundpro Studios. He played around with a number of local groups and produced Moncton, New Brunswick band Chris Colepaugh & The Cosmic Crew’s sophomore album, Mazes And Mirrors, in 1997.

8) He knew how to play 200 Beatles songs and once toured with a tribute band featuring Pete Best, the original drummer of The Beatles.

9) He was quoted in Rolling Stone, he appeared on Top Of The Pops and The Johnny Carson Show, his face was seen all over MTV and you can still catch him on that commercial for Cool Rock.

10) After being diagnosed with lung cancer, he held a sold-out six hour-long Party/Fundraiser for Cancer Research in Halifax in May of 2002, entitled “With A Little Help From My Friends.” The show featured 20 acts, including the likes of Jimmy Rankin and the legendary Sam Moon â€” MacMichael joined a number of them on guitar and vocals. The show concluded with a Cutting Crew reunion, featuring MacMichael and fellow founding member Nick Van Eede. Kevin MacMichael, we salute you. ”Jon Bruhm